Stile Libero is strategically located in the Historic town of Orio al Serio, just a few minutes from the Airport (20 minutes away on foot), 3 km from downtown Bergamo and only a few kilometers from the lakes, mountains and Milan. The small and quiet town of Orio provides all the necessities (market, bank, post office, pharmacy) with good restaurants, pizzerias and typical trattoria. The nearby airport makes it easy to rent a car or shuttle to nearby cities (Milan, Brescia, Verona). Downtown Bergamo is only 3 km far away by bus or taxi. 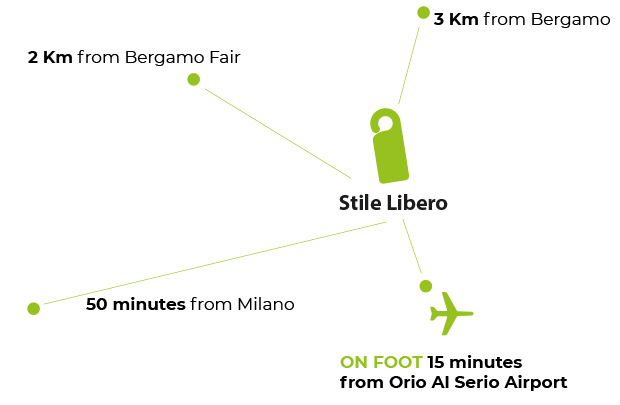 On foot: exit the airport keeping to your right (with the airport on the right and highway on the left). Coasting the airport on the pedestrian path, without ever crossing the street. 1km laterm after the Cemetery, continue to the traffic light. Here take Via Cristoforo Colombo for 100 metres to Via IV Novembre.

Pick up service on request.